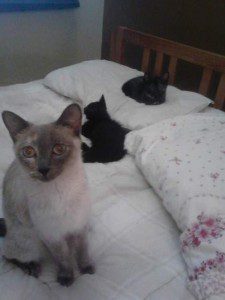 What is the nursery rhyme saying? Did they lose their reward or their comfort?

Three little kittens lost their mittens, and they began to cry.

“Oh mother dear, we sadly fear we lost our mittens.”

“What! You naughty kittens! Then you shall have no pie.”

A Walk to Remember

My son and his daughter walked near some concrete stairs. Before stepping down the stairs, he took the 5-year-old girl’s hand. She was always excited to go for walks with her daddy along the Assiniboine River. As they made their way down the old steps, they heard a faint meow. Where was the sound coming from? Could it be in the bushes?

As they reached the lowest step just before the pathway along the river bank, the sound kept increasing. Then a young woman approached them and said, “Someone left these kittens here.” My granddaughter turned around and said, “Look daddy, two black kittens.” pointing to a duffle bag. They huddled and hung on to one another beside the bag. There was no momma cat in sight.

My granddaughter couldn’t contain her exuberance as she picked up one little scared kitten. “Daddy, can we take them home, please?” She loved animals of any shape or size.

Meanwhile, a man, who was nearby showed up and joined the conversation. He exclaimed that he couldn’t take the kittens because his building didn’t allow pets. Then the woman also said, “I can’t care for them either as my husband is allergic.”

As my son listened to these two strangers, he wondered if they were together or just happened to arrive at the scene at the same time. He told them, “I can take them for now. I have a cat already so I can’t keep them, but I have food and litter until a place is found at the pet rescue shelter.”

Then they heard another sound coming from the edge of the river. They all walked into tall grass and strolled towards the meow screech. But a louder sound pointed towards the tree. Sure enough, there was a cat in the tree.

Because it was so high, no one could reach for it. So finally, daddy and daughter walked back towards their building hugging two little kittens tightly. As they walked away, the man asked about the third kitten? Was the one in the tree a kitten or the momma cat? The woman hushed him quickly.

Maybe they knew about the momma cat in the tree so they must know about the kittens also? My son had told them he would be back with some food to coax the cat down from the tree after he brings the kittens back to his apartment.

Once they were back in the apartment, he made some phone calls to find someone to come to rescue the cat in the tree. He also called animal shelters about placement. No one was able to help at the moment.

With a handful of cat food, they made another trip down to the river pathway. To their surprise, the two strangers were gone along with the duffle bag! Did they have intentions of abandoning the kitties, but lost the nerve and stood by to watch if someone would rescue them?

A scrawny skinny momma kitty sat where the two black kittens had huddled just prior!

The momma was searching for her babies! With beautiful eyes staring into one spot she sat very still. Only when approached by strangers did she move backwards. But with food in his hand, my son was able to coax her to move closer. He picked her up in his loving arms and carried momma kitty back to her babies.

Baby Moses in the Basket

Like baby Moses was left in a basket and placed in the river by the mother so these kitties were left by the riverbank by the owners. Why would these people have been close by? Just the same way, Miriam, the sister of Moses, was left to watch out for Moses as his basket floated in the river. The mother wanted to assure that the baby was safe and someone would pick him up and bring him to safety. It was Pharaoh’s daughter who came by and picked up the baby and brought him to her own palace where he grew up.

My son and granddaughter were at the right place and the right time. They were the right people to come by the scene. They are known to pick up strays and keep caring for them to the best of their ability.

Abandoning cats is wrong. Why not bring them to shelters or try to find homes for them? If everyone does their part, more cats will be off the streets and garbage dumpsters.

A few days later, these three little kittens were placed into a safe cat rescue shelter where they are nurtured until they are ready for adoption.

These little kittens found their mittens with a reward of pie!

An inspiring story of kitty rescue!